“Emerald ash borer” is a term being thrown around often lately, but what does the emerald ash borer, or EAB, really mean for Colorado? Should home owners and neighborhoods worry about this pest?

The answer is more complicated than you might suspect. Although EAB kills most ash trees within 1 to 3 years of infestation, as of October 2015, it has only been confirmed in Boulder County. Once infestation sets in, the tree will likely be killed. Colorado is trying to manage the spread of the ash borer, and it’s currently quarantined due to the devastation it causes. Because this beetle has the ability to fly some distances and is often also spread through human-vectored firewood transfer, we need to be very careful and concerned about the spread of the emerald ash borer in Colorado.

What is the Emerald Ash Borer? 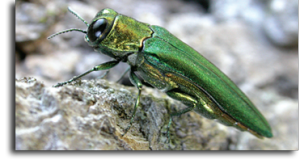 The emerald ash borer is a non-native beetle that consumes vital parts of ash trees until the ash tree is unable to survive. EAB came to Michigan in 2002, and ash trees have died by the millions across the United States since the introduction. The pest was found and confirmed in Boulder, Colorado in September of 2013.

As of October, 2015, the emerald ash borer is not confirmed in Parker. Avoid any tree service that says otherwise. The State Department of Agriculture makes this call, and will announce this clearly and publically when and if the Emerald Ash Borer is confirmed in specific areas.

In Colorado we’ll need to approach emerald ash borer differently than many other states. That’s because the ash/lilac borer – a similar pest of ash trees – is already affecting and killing ash trees locally. While not as aggressive as EAB, it does reduce the effectiveness of treatments designed to prevent EAB. Therefore, if your tree is heavily infested with ash/lilac borer already, it may be best to remove and replace it.

If you have ash trees, it’s important to have a licensed, qualified tree service inspect your tree to determine your ash tree health and whether it has been infested by any borers.

http://www.emeraldashborer.info/map.cfm – See a map of areas confirmed with the Emerald Ash Borer in Colorado.