During most of June-July, 2015, the Colorado Department of Agriculture is releasing 1,000 parasitic wasps in Boulder, Colorado to help eliminate the emerald ash borer (EAB), which has killed millions of ash trees in the United States and has been attacking ash trees in Boulder, Colorado. Colorado is releasing wasps to save ash trees from the emerald ash borer, which is a green beetle responsible for the death of millions of trees in the United States. The EAB is a non-native beetle that is believed to have entered the United States from China in infested wood via ship or airplane. The emerald ash borer is a lethal beetle to unprotected ash trees. These wasps will help fight the beetle. Another preventative method has been proven to prevent EAB infestation. Click here to get your free estimate to treat ash trees in the Parker, Highlands Ranch, Castle Rock, and multiple areas surrounding Denver. 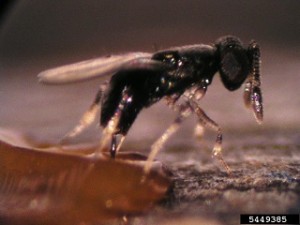 This wasp release in the Boulder area is not the first wasp introduction to decrease populations of the emerald ash borer in Colorado. The Emerald Ash Borer Response team states that “this is the second species of EAB parasitoid to be released in Colorado. In 2014, the team released the stingless wasp Tetrastichus planipennisi, which instead targets EAB larvae developing under the bark of ash trees.”

This and next month, the new gnat-sized Oobius agrili wasp pictured on the left (photo by Debbie Miller, USDA Forest Service) will eliminate the EAB in a different way than the wasp of 2014. The EAB response team has shared how the wasp is able to kill the EAB. Oobius agrili wasp “inserts its own egg inside the host (emerald ash borer) egg, where it will hatch, grow and kill the EAB larva before it can emerge. The stingless wasps pose no threat to people or pets.”

Is the Emerald Ash Borer a Threat to Ash Trees Everywhere?

The EAB is a threat to ash trees wherever they come into contact with them within the United States. In China, the beetle has natural predators that control the beetle population. There are multiple types of wasps in China that decrease the number of these beetles in ash trees. In the United States, the wasp is not naturally present in our environment and as a consequence we have lost millions of ash trees to this little lethal beetle. The EAB was also discovered to have been transported into Canada.

Fox31 Denver has broadcasted the battle against the emerald ash borer.  According to John Kaltenbach, a biological control specialist for the Colorado Department of Agriculture, “It’s probably the worst pest Colorado has ever seen.”

The state of Colorado chooses introducing the parasitic wasp in Boulder, which is the only Colorado location confirmed with emerald ash borer (photo to the right by Dan West, Colorado State Forest Service) infested ash trees. The government regulates the introduction or release of foreign insects and wasps in order to protect our environment and make sure he introduction doesn’t have a bad affect on other species or plant life. Since the emerald ash borer was discovered in Michigan in 2002, a special agency has been developed in order to research and do in-house trials of how to effectively lower the EAB population. A few wasps that do not sting humans have been utilized in the lab to find out how they will be able to kill the beetles that are killing ash trees. There are a few different ways that these wasps are able to kill the emerald ash borer, including placing their eggs within the EAB eggs, which does not allow the EAB eggs to develop into adults.

Where is the Emerald Ash Borer in Colorado and How is it Spread?

The emerald ash borer (EAB) was confirmed in Boulder by the City of Boulder forestry department on September 23, 2013. The EAB is a lethal beetle to ash trees as the adult emerald ash borer eats ash tree leaves while its larva survives on the nutrients in the ash tree bark, which eventually kills the tree within a few years.

Currently in Colorado, the EAB has only been confirmed in the Boulder area. However, the ash borer is able to fly up to a half mile and then get into ash trees that are currently uninfested. The EAB is also easily spread when people transport firewood of infested trees.

If you have ash trees you want to protect from the emerald ash borer or if you are worried your tree(s) are infested, please contact us here for a free estimate.

We are licensed, insured, professional tree service company and our team includes arborists with many years of experience in the tree service business. Contact us to receive an estimate or quote to provide preventative treatments of our tried and true methods which we know work to protect ash trees from the emerald ash borer.